In September, the Supreme Council for Cyberspace (SCC) held its first meeting since Iran’s new President Ebrahim Raisi took office. The meeting, which coincided with the beginning of the academic year, focused on online education. The subject of online education, which became the subject of significant concern and attention following the COVID-19 pandemic continues to be a significant issue in Iran. A year on from the pandemic, ensuring free access to the country’s education platform is yet to be clearly implemented and enforced, which threatens to exclude students from marginalised groups from access to education.

Iran’s private sector also came under significant pressure from both international and domestic forces. A number of popular apps such as the video sharing platform Aparat and the navigation app Balad were removed from the Google Play Store. According to the apps’ creators, Google cited US sanctions as the reason for their removal. Meanwhile, Iranian authorities took action against a number of private tech companies which has caused further anxiety within Iran’s private tech sector about the number of roadblocks and restrictions they face in order to be able provide services to Iranians.

This report is supplemented by our monthly Network Monitor which provides the latest on internet disruptions and shutdowns in Iran.

On 14 September the Supreme Council for Cyberspace (SCC) held its first meeting under Ebrahim Raisi’s administration, with the new President serving as chair. According to a statement from the SCC, the meeting focused on online education, and the Ministry of Education’s online learning platform known as “Shad”. The SCC called for the platform to offer “free content” and for the Ministry of Education to be responsible for issuing licenses for private sector organisations to produce content for the platform. The platform was created by the Education Ministry in collaboration with Hamrah-e-Aval (MCI) in April 2020, at the start of the COVID-19 pandemic.

The Council also granted approval for Iran’s Planning and Budget Organisation to allocate a budget line for the “expansion of online education” and to provide “financial assistance for teachers and students in need” in the annual budget.

Online education services have been a particularly thorny issue in Iran since the outbreak of the COVID-19 pandemic forced a switch to online learning. The rapid shift to online learning has particularly disadvantaged students in poorer, more rural regions where connectivity and access to devices remains more limited.

Despite the Majles legislating for the platform’s usage to be exempt from data tariffs (and therefore free), it was announced earlier this year that the scheme would be replaced with “student SIM cards” containing free internet packages allowing “access to educational content” set by the Ministry of Education, adding further confusion around access to the app. Additionally, these SIM cards allowing access to whitelisted content as approved by authorities are another step towards the implementation of “layered filtering” in Iran.

The SCC’s latest meeting does not clarify how Shad will be freely accessed by users following the ICT Ministry’s announcement in June that Shad’s data tariff exemptions would be discontinued.

On 7 September the names of a number of MPs set to serve as members of a joint parliamentary committee to review the “User Protection and Core Online Services” Online Services” bill (Referred to as طرح صیانت in Persian) were announced.

The committee is set to be made up of members from several parliamentary committees. So far, the following names have been reported by domestic outlets:

According to Ali Yazdikhah on 30 September, members from the National Security and Judicial  Committees had also put forward members to the Majles Management Committee to join the Joint Special Committee. According to Yazdikhah, the Committee has 23 members drawn from nine parliamentary committees. He added that the Joint Special Committee would commence its work within the following week, with the aim of completing its review of the bill within 4-5 months.

Filterwatch will monitor the progress of the bill as it moves through the parliamentary process and will provide any updates in future issues of the Policy Monitor.

Jebelli, who prior to his appointment was the director of the IRIB World Service, replaces Abdolali Ali-Asgari who served as Managing Director for over five years.

The state-controlled IRIB remains in charge of Iran’s audio-visual regulatory body, SATRA, which has been attempting to tighten its regulatory control over online content and licensing, especially given the rise of private IPTV services in the country. The organisation also runs its own IPTV services. Filterwatch has already written about the struggle for control over online content as well as jurisdiction over licensing and regulation which can be read here.

On 29 September a new VOD content production licensing platform called “Almas” (Persian: الماس) was launched online. The new platform, refers requests to a body known as the Council for Licensing Professional Content, and is said to be under the control of the IRIB according to its secretary, Gholamreza Mirhosseini. The Council’s members are also made up of a number of former IRIB officials.

According to Mirhosseini, the body will now be overseeing the production of online audio visual content, taking over the role from SATRA, and SATRA will instead be in charge of issuing licenses and will not be involved in content review. Mirhosseini also added that licenses from other bodies “will be recognised,” which refers to a long running dispute between the IRIB and the Ministry of Culture and Islamic Guidance over jurisdiction for licensing online video content.

The issue was resolved two days later on 14 September. According to a statement from Snapp, the issue was not “caused by Snapp, instead DNS filtering was behind the issue, the cause of which is being investigated.”

On 8 September the popular Iranian video sharing app Aparat and the VOD platform Filimio – both owned by Saba Idea Holdings (Persian: صباایده) – were removed from the Google Play Store. According to a statement from Saba Idea, the apps were removed “pursuant to section 16.5 of the Developer Distribution Agreement” which relates to US sanctions. The statement was accompanied by an email Saba Idea claimed to have received from Google Play Store, stating the above.

Similarly, the Iranian navigation app Balad also reported its removal from the Google Play Store for the same reasons. The apps continue to be available via domestic app stores.

In a statement reacting to the app’s removals, the ICT Ministry said that it would pursue “legal and political means to [uphold] the rights of Iranian platforms.”

In August, the Iranian social media app Rubika and the search engine Zarebin were also removed from the Google Play Store, however the reason for their removal was not made clear.

Given that there have been no recent US sanctions issued against Iran which would affect the technology sector, it is unclear why the recent decisions have been made by Google, especially as other Iranian apps remain on the platform.

The sudden takedown of these apps by Google forces Iranian users to increasing rely on less domestic infrastructure, exposing Iranian user to increased security risks. Filterwatch has already written about the impact of sanctions and over-compliance by international companies on digital rights in Iran.

On 18 September Iran’s Ministry of Health reported an internet outage due to “software issues” with the Telecommunication Company of Iran (TCI) in Tehran. The outage impacted vaccination centres, according to a statement from the Ministry of Health, which “prevented them from administering vaccines.”

According to TCI, the issue was resolved “as quickly as possible”, and connectivity was restored on the same day.

On 19 September  numerous Iranian tech outlets reported that Mostafa Amiri and Ali Amiri, the founders of the Iranian e-payment app ‘Zarinpal’, were arrested upon arrival at Iran’s Central Bank, where they were arriving for a meeting. They were questioned by the Bank’s security upon arrival before being arrested by Iran’s Cyber Police, FATA, on charges relating to “disruption of public opinion.” They were released after a few hours on the same day after providing a written personal undertaking to the court, though the exact details of it were not reported.

According to a statement by Zarinpal, the meeting at the Central Bank was requested by the company along with five other e-payment service providers in connection with the recent compulsory requirement for e-payment services to obtain an “e-Namad” certification from Iran’s Central Bank. This certification was designed for websites, meaning that businesses operating solely through social media platforms are unable to obtain it, and therefore are unable to use e-payment services. As well as posing financial challenges for such businesses, this requirement also incentivises the customers of social media-based businesses to use less secure payment methods, such as direct bank  transfers.

This is not the first time that the founders of Zarinpal have encountered legal troubles. In December 2020, Mostafa Amiri received a one year prison sentence for “financial crimes” and other charges relating to a fraudulent payment made through the platform.

Recent pressures on a number of leading Iranian tech companies and entrepreneurs has provoked anxiety within the sector about its prospects for growth – especially in light of the additional limitations posed to them such as the continuing US sanctions regime, as well as the prospects of the looming “Online Services” bill.

According to a statement released by the IRIB on 12 September, Aparat CEO Mohammad Javad Shakuri Moghdam, was issued with a fine for “profiting from content belonging to the IRIB”, by hosting content produced by the organisation. Although the size of the fine was not disclosed, the IRIB statement said that Aparat’s actions had caused “irreparable harm” which had “weakened” the organisation.

As noted above, Iran’s audio-visual regulatory body SATRA has been attempting to assert its regulatory powers over online content – particularly in the face of the rise of domestic private IPTV services. This move against Aparat represents another effort to maintain the exclusivity of IRIB’s content on its own online services.

Filterwatch has recently published a report concerning the rise of private IPTV services in Iran and the tensions surrounding regulation and control of these platforms.

According to the results of a survey of 803 users of the Iranian VOD platform Filimio by the Iranian Students Polling Agency (ISPA) released on 25 September, 61.2% of users responded that they had experienced a reduction in use of satellite TV services following their signing up to a Filimio membership, while 24.5% said that they had seen no changes in their consumption of satellite TV programming. 6.3% of respondents mentioned an increase in their consumption of satellite TV. 43.9% of users reported that they mostly followed the news via satellite TV, followed by 38% focusing on movies.

Internet Protocol Television (IPTV) services have had a significant effect on the viewing habits of Iranians, similar to the rest of the world. Filterwatch has recently published a report concerning the rise of private IPTV services in Iran and the tensions surrounding regulation and control of these platforms. 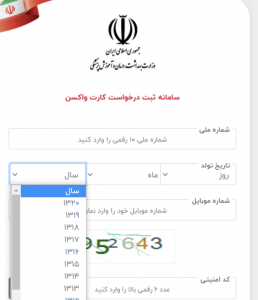 Initially, Iran’s vaccine passport platform was limited to users born on or before 1941 before being expanded to include all other birth dates. Source: Peivast

According to the Iranian tech magazine, Peivast, vaccine passports were initially limited to those born before 1941, before the age range was expanded to include all dates a few days later. No official reason was provided by the Ministry of Health about the initial age restriction, Peivast speculated that the restriction could be in place to regulate demand or it could be due to a lack of information on those born after 1941.