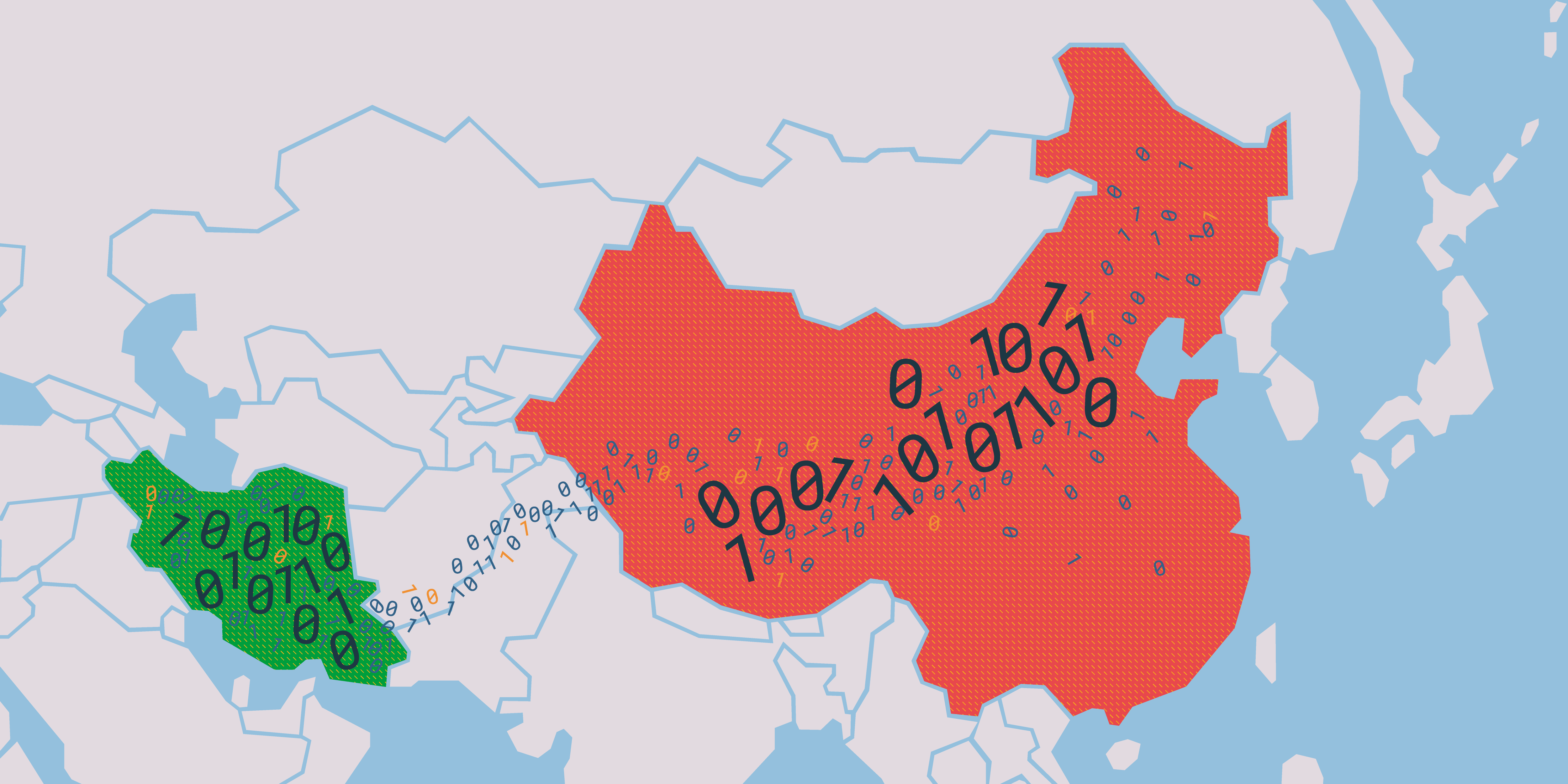 The Iran-China Partnership: A Bad Deal for Citizens and Tech Companies

A leaked draft of an Iran-China cooperation agreement highlights numerous threats to Iranians’ digital rights, and to the country’s growing technology sector.

In the early months of 2020 the Iranian government announced that the cabinet had approved the draft text of an agreement for a 25 year partnership with China. From the get-go the announcement received a significant amount of attention from the Iranian public and from high-profile political figures, despite few details being made publicly available.

In July 2020 a number of Iranian outlets published an 18-page document which appears to be a copy of the draft agreement that received government approval earlier in the year. The document is dated to June 2020, and contains some detail about a number of proposed areas of agreement. The publication of the leaked document led to an intensification of the criticism levelled against the proposed partnership deal. These critics included more than 100 Iranian public figures, journalists, academics and opposition politicians based in the diaspora, who wrote to UN Secretary-General António Guterres demanding that the UN intervene to stop the agreement from being signed. They made this call on the grounds that the proposed agreement forgoes Iran’s sovereignty.

The “Iran-China 25-Year Cooperation Program” (or the “Comprehensive Strategic Partnership between I.R. Iran & P.R. China”) is an agreement drawn up between the governments of the two countries that may result in a $400bn Chinese investment in Iran. Included in the plan are a number of anticipated research and development collaborations between the two countries.

Speculation around the deal captured public attention to the point that Iran’s former President Mahmoud Ahmadinejad also made his criticisms of the proposed deal public. According to an article published on the pro-Ahmadinejad site Dolat-e Bahar [“The Government of Spring”], Ahmadinejad gave a speech in Gilan on June 27, where he stated: “We have heard that they are negotiating and want to sign a new 25-year agreement with a foreign country, and no one knows [anything] about it.”

There are significant doubts about whether such an ambitious agreement could ever be signed, or indeed delivered. However, based on the leaked document, one significant aspect of the proposed deal is Iran’s willingness to collaborate with China on its Internet localisation project. The document also provides some additional details around the potential scope of the proposed collaboration.

Over the last decade, Iran has insisted that the National Information Network (NIN) project’s primary goal is to establish Iranian sovereignty in cyberspace. However, the extent of collaboration envisioned with China in the leaked draft leaves no doubt that by “sovereignty”, Iran envisages its disconnection from the global web, and of its connections to Western Europe and North America. Indeed, based on the leaked document, it can be concluded that NIN’s localisation plan seeks to achieve the localisation of cyberspace and the expansion of information controls, even at the expense of deepening its dependency on a global power such as China.

The collaboration and partnership proposed in the leaked document has serious implications for the digital rights of Internet users, and the continued vitality of the digital economy sector in Iran.  The proposed partnership once again demonstrates how a lack of meaningful measures protecting digital rights can leave both users and private companies in Iran highly vulnerable to aggressive government interventions.

The Deal On ICT Cooperation

The 18-page leaked document contains a section labeled “ICT Cooperation”, under which a number of bullet points outline the envisioned areas of collaboration between the two countries. These areas include the development of:

Other proposed areas of collaboration in the document include:

In other sections of the document further collaborations are discussed relating to the establishment of IXPs and data transition lines (including undersea cables).

Although the leaked document does not give us a fully comprehensive image of precisely what form these collaborations might take, it is apparent that ICT and Internet infrastructure development will constitute a central area of collaboration between the two countries. This fact has been repeated outright by Iranian politicians: in September 2020, Iranian MP Mohammad Saleh Jokar confirmed to the media that Iran and China would collaborate on the delivery of the National Information Network.

Governments seeking to expand their information control and surveillance capacities are increasingly turning to internet localisation strategies in order to achieve greater levels of control over their populations in online spaces. Confluences in Iran and China’s appraisals of the internet go beyond just a shared fear of its potential to democratise mass communications and the media; fears expressed in China’s “Document Number 9” about the ideologically ‘Western’ nature of the internet are shared by a significant segment of Iran’s leadership (such as Supreme Council of Cultural Revolution Secretary Saied Reza Ameli). This is one reason that both countries are so openly committed to developing what they call “sovereign cyberspace”, in place of the concept of the open global Internet.

It is too early for us to understand exactly how the two states’ ideological convergence might manifest in their delivery of the 25-Year Cooperation Program, however the development of a formal long-term collaboration on internet localisation will doubtless have devastating effects for the digital rights of internet users in Iran.

With the development of domestic messaging apps, legislation for “Legal VPNs”, and investment in the production of domestic mobile phones, it is becoming clear that Iran’s Supreme Council for Cyberspace (SCC) sees the future of information controls (and the NIN) in the development of a “layered filtering” regime. This is a vision that Iranian and Chinese authorities share. In fact, the best examples of what an Iranian layered filtering regime may look like in reality has recently been tested in China. In recent months, a number of apps and browsers have been briefly introduced in China that claimed users could legally access some censored international content, so long as these apps were linked with one’s national legal ID.

Although the projects named in this leaked document do not directly demonstrate collaboration on the implementation of information controls in Iran, it is impossible to imagine a meaningful ICT partnership between these two countries that does not see Iran drawing upon China’s technological expertise in this realm.

This leaked document must serve as a serious warning to all those concerned about digital rights in Iran. Even if the collaboration does not take place strictly within the confines of the 25-Year Cooperation Program, Iran’s willingness to engage with the Chinese state in its development of the NIN will undoubtedly have serious and long-lasting consequences for the digital rights of Iranians.

A Dark Future For Iranian Startups?

As well as threatening the further decay of digital rights, the expansion of collaborations between China and Iran in the development of a localised internet may also have serious negative consequences for the digital economy in Iran, and particularly for tech startups.

In the last decade, we have witnessed significant growth in Iran’s digital economy, where a number of tech start-ups have thrived. Largely, these young companies can be divided into two groups: those that benefited from the filtering of foreign-based services, and those that benefited from the forced isolation of the Iranian economy due to the imposition of sanctions.

Both of these groups stand to lose out from such a close collaboration between the Iranian government and Chinese state-backed companies. Companies such as Tencent, Baidu, and Huawei Technologies are unlikely to undertake development of the Iranian NIN unless they stand to make financial gains from this endeavour in Iran’s closed market. If Iran were to call on these companies to support the implementation of the NIN, it could certainly make assurances about their future dominance in the Iranian market.

This risk is heightened in light of the fact that without proper protections such as net-neutrality, Iranian authorities have significant power to pick and choose the market’s winners. As we have seen in the development of domestic messaging apps, the state is not afraid to pick winners, or to dedicate significant resources to them if such a move could benefit the advancement of its localisation project.

The combination of Iran’s willingness to use its powers to guarantee a significant market share for Chinese companies, as well as the fact that these companies can deploy significantly more resources than their Iranian counterparts could lead to even established local companies such as Snapp and Digikala standing to lose from this deal. There is even the potential for them to be muscled out of the domestic market by their Chinese competitors.

The Iran – China deal as outlined in the leaked document makes one thing clear: Iran’s Internet localisation project may bring a short-term windfall for some internet startups, but the absence of meaningful protections for basic digital rights constitutes a serious threat to the future of the domestic digital economy in Iran.

Yet the deal that may accelerate the localisation of the internet in Iran may ironically end up sacrificing Iran’s emerging domestic technology sector in favour of state-backed Chinese enterprises. In this sense, the proposed agreement is one of the clearest demonstrations yet that Iran’s digital economy sector must prioritise seeking meaningful legal safeguards for basic digital rights, such as net neutrality and data protection.

Iranian start-ups cannot simply trust the pro-digital economy rhetoric of some Iranian officials. It is impossible to imagine that Iran’s ICT Minister Mohammad-Javad Azari Jahromi and his team, who portray themselves as the voice of Iran’s startup community, have not played a significant role in drawing up the blueprint for expansive ICT sector collaboration between the two countries.

The blueprint outlined in the leaked document makes it clear that the battle for fundamental digital rights in Iran is a shared struggle across all sections of society and the digital economy. With the exception of a small group of state-backed technology companies, Iran’s private sector has just as much to lose as the general public from this deal.

Artificial Intelligence & Digital Rights in Iran: An Introduction
What Does Iran’s 11th Parliament Mean for the Internet?