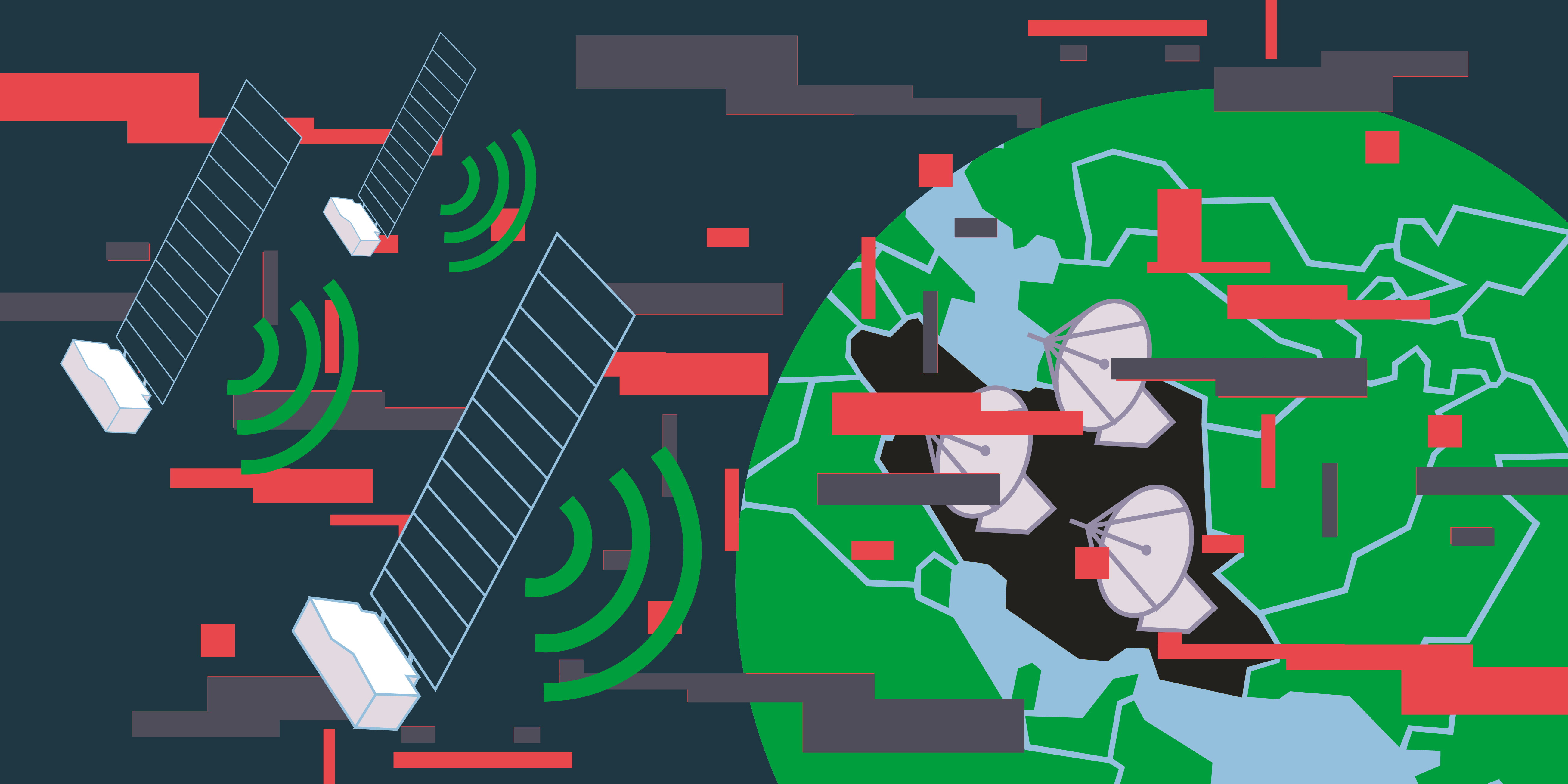 As excitement builds over the potential of satellite-based internet services, we argue that they’re unlikely to provide solutions to online censorship any time soon.

A new generation of satellite internet technology promising global internet coverage has been hyped up as a potential solution to a host of connectivity challenges. Although its stated objective appears to be to rapidly expand internet access to disconnected rural communities, it is also viewed as a potential means of circumventing internet shutdowns and internet censorship in politically closed countries.

The challenges of inequality in access and internet censorship are both familiar to Iranian internet users. Following a lengthy government-sanctioned internet shutdown in November 2019, and a number of regional internet shutdowns since, many Iranians live in fear of the next time the country gets plunged into darkness. But some hopes were renewed following Elon Musk’s response to a Twitter user about Starlink’s availability in Iran, when he said: “We will support as best we can”.

However, a number of obstacles exist that could prevent satellite internet from granting users free and unrestricted access to the global Internet any time soon, many of which have already been written about in detail. Although satellite internet is not currently available in Iran, we wanted to take this opportunity to explore some of the challenges facing its potential roll-out, and to explain why these challenges mean that, under the current circumstances, satellite internet is highly unlikely to offer a quick solution to the threat of shutdowns in Iran.

What Do We Mean by Satellite Internet?

Satellite internet – that is, internet access provided by communication satellites – is not itself a new technology. Commercial satellite internet providers such as Viasat and HughesNet have already been providing satellite-based internet access for decades in the US, especially in remote areas where fixed (wired) broadband is not readily accessible. Other companies, such as Freedomsat offer services to customers in Europe. Most of these use older technologies such as geosynchronous satellites, which orbit in a fixed position at 35,786 kilometers above the Earth’s surface.

Despite their availability, these older satellite internet technologies have latency issues, which can pose problems for internet users seeking to access online media content, or to engage in other higher-bandwidth activities like video conferencing.

Enter the new generation of satellite internet services, including SpaceX’s Starlink, Amazon’s Project Kuiper, and OneWeb. These make use of low Earth orbit (LEO) satellites, and orbit the Earth at a much closer distance of 500 to 2,000 kilometers. These satellites promise to provide high-speed internet by resolving the latency issues inherent to geosynchronous satellites, and bringing their services to a wider range of users through their satellite internet constellations.

Starlink is also looking to connect the satellites in its constellations to allow for data to be beamed between them, therefore reducing the need for dedicated ground stations, as well as reducing latency issues. To date, Starlink has delivered 1,737 satellites into orbit, with the latest launch in May 2021 making it the largest satellite internet constellation. Starlink expects to provide “continuous global coverage” by September 2021, pending regulatory approval according to its president Gwynne Shotwell.

Satellite Internet in Iran: What Are the Barriers?

The Iranian state’s vision of the internet is focused on the progress and the completion of the  National Information Network (NIN) project, which is centered around a localised internet in which authorities have ever-increasing levels of control over internet infrastructure, as well as over online content and services. Could the arrival of satellite internet compete with Iran’s vision for the internet? We explore some of the challenges standing in the way of satellite internet in Iran, making it unlikely for it to be a solution for Iranians to gain unrestricted access to the global internet.

Similar to other Internet Service Providers (ISPs), satellite internet providers require licences in order to operate inside a country. ISPs are often always required to commit to comply with local laws and regulations before receiving such licenses.

Earlier in the year, Abolhassan Firouzabadi, the Secretary to Iran’s central policy making body the Supreme Council for Cyberspace (SCC), was quoted as saying that the arrival of satellite internet “could question the [existence] of the entire NIN”. He also added that “regulations have to be issued so that those [providers] wishing to operate in the country acquire licenses”. Iranian policy makers are aware that they may need to acknowledge the availability of satellite internet for its benefits in increasing network quality in the country. Fixed broadband penetration rates in Iran remain very low (especially in rural areas), leading to some strain on Iran’s mobile internet networks. Satellite internet could pose a solution to this challenge without requiring massive investment in land-based network infrastructure. While we do not know what the licensing requirements for the operation of satellite internet in Iran may be, it is highly unlikely that it will not call for compliance with Iran’s current internet restrictions and content filtering, as well as compliance with shutdown orders.

Satellite internet users require a receiver in order to gain access to satellite internet. Starlink currently offers this to its beta customers in its coverage area (which currently does not include Iran) who are able to order or pre-order the package for $499.00 (21,010,395.00 IRR) with an additional $99.00 (4,168,395.00 IRR) fee per month for internet access. There is no data cap for beta customers, but whether or not this will remain for future customers is unconfirmed.

Given the rate of inflation, Iranians’ lack of access to international financial systems, and the astronomical USD-IRR exchange rate, this would be an incredibly costly option for most Iranians under the current circumstances. This is supposing that full access to operate in the country were to be granted; however, given that a number of major satellite internet providers such as Starlink and Kupier are US-based, their activities could be seriously complicated or even curtailed due to restrictions imposed under US sanctions targeting commercial activities in Iran.

What if satellite internet providers decided to broadcast into the country without regard to the country’s licencing and regulatory requirements? In addition to not being able to make financial  returns from their services, there are a number of other consequences to consider. The International Telecommunication Union (ITU), a UN body, deals with telecommunication frequency allocations, including frequencies required for satellite technologies. The ITU’s constitution recognises spectrum management “as a sovereign matter” therefore states have ultimate power over who, and the process through which entities are able to use various frequency bands. Therefore, unauthorised use of these frequencies would interfere with a country’s sovereign rights, and lead to potential frequency jamming as well as companies facing a potential backlash from other states. Iran’s Cyber Police (FATA) is also well placed to enforce Iran’s dominance over its internet providers, through its continued monitoring of online spaces in order to prevent the spread of access to “unauthorised” satellite internet.

This is not the first time Iranian authorities have had to confront satellite technology. Satellite TV dishes proliferated rapidly across Iran in the 1990s, offering consumers alternatives to state-controlled channels for the first time. This led to the rapid implementation of legislation banning the import or distribution of satellite receivers in 1995, as a further means to restrict freedom of speech and access to information. The ban was enforced through police raids, confiscation of equipment, fines, and frequency jamming however these efforts slowed as time went on.

Alternatives to US Satellite Internet Providers?

Of course, there are alternatives to US based companies: China has also been working on its rival constellation satellite internet project, mostly through state-owned programmes. If China’s programme is also able to eventually offer global services, it has the potential to become a viable alternative to US-based satellite internet providers for improving connectivity in Iran.

Given China’s restrictive information control practices and its close relationship with Iran, it is more likely that Chinese providers would be willing to comply with online restrictions placed on Iranians, from censorship to internet shutdowns. This could possibly make it a more desirable partner for providing a solution to Iran’s rural high-speed internet challenge, without compromising the workings of the NIN.

Other Issues Concerning Commercial Use

There are also a number of broader, more global concerns regarding the use of satellite internet.

When it comes to Starlink’s performance, initial reviews have been mixed. While some have praised its performance, others have described its beta product as “unreliable, inconsistent, and foiled by even the merest suggestion of trees.” Starlink has also been grappling with other environmental challenges, with satellite dishes reportedly overheating in Arizona, causing them to go into “thermal shutdown” and resulting in loss of internet connectivity for several hours for its customers.  These are some of the challenges Starlink still needs to overcome as it continues the rollout of its services.

There is the issue of security which has been raised about the older generation of satellite internet. This includes the vulnerability of unencrypted satellite internet data transmitted from a satellite to cyberattacks and interceptions. While Stralink claims to “encrypt information sent via the Starlink services to and from your Starlink equipment.” on their website, however, does not provide further details on encryption protocols. The issue of security is a major concern and consideration if users in vulnerable areas prone to government surveillance are to use satellite internet technologies.

In the US, the Federal Communications Commission’s (FCC) is facing a legal challenge over its approval of projects such as Starlink’s “mega constellations” regarding their potential breach of US environmental law. Other concerns have been raised about the impact of these satellite constellations on astronomical observations and activities.

Lastly, many have pointed out that there is also the possibility that these services could breach principles of net neutrality, as tech giants such as Amazon, Google, or even Facebook may seek to leverage this new infrastructure to preferentially direct user traffic towards their own services.

Satellite Internet is Not the Answer

It may take a while longer for the various satellite internet providers to extend their geographical coverage to Iran. While the possibility very much exists that satellite-based connections to the global internet may be technically possible, the regulatory and financial constraints explored above provide a strong set of challenges which stand in the way of Iranians accessing such services. Taken together with Iran’s long-term ambitions for the NIN, we would argue that in the current environment, satellite internet services are unlikely to be able to offer a solution to the challenges of censorship or access in Iran in the foreseeable future.

While Iran may at some point look to alternative non-US-based satellite internet providers in order to improve nationwide connectivity, it is unlikely that these will provide any positive solutions to the problems of content filtering or internet shutdowns, or that they will offer users with free, secure access to the global internet.

For now, the best tools available for improving the situation of Iran’s internet remain continued advocacy for an open and free Internet, and the continued development of our understanding about how to provide safe and unrestricted internet access inside politically closed countries.

Iran suffered a number of national power outages which contributed to network disruptions throughout the month.