Iran suffered a number of national power outages which contributed to network disruptions throughout the month.

In May, Iran suffered from several nationwide power outages, which contributed to a series of network disruptions throughout the month. According to Arash Karimbeigi, CEO of the major Iranian ISP Shatel, the power outages meant that mobile operators struggled to provide power for crucial communications infrastructure, including Base Transceiver Station (BTS) antennas.

This report makes use of data from Internet Outage Detection and Analysis (IODA), which is a project of the Center for Applied Internet Data Analysis (CAIDA), based at the University of California’s San Diego Supercomputer Center. 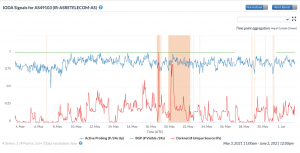 Based on IODA data from May 1 – 30, we observed reductions of traffic on multiple occasions, including such as May 4, 7, 13, 14, 21, and 28. Iranian officials have failed to provide any explanation for any of these disruptions besides citing the effects of nationwide power outages on mobile operators’ BTS antennas. However, a source working at one of Iran’s internet providers told Filterwatch that they were cut off from the internet for three hours on May 19 from 20:00 EDT until around 22:52 EDT. According to this trusted source, they were cut off from the Telecommunication Infrastructure Company (TIC) without any explanation from the TIC.

The source spoke with Filterwatch under condition of anonymity on May 19 2021, saying: “All of our links had problems. We did several traceroutes, all of them made their way successfully to the infrastructure [TIC] and there, we lost all packets.”

According to the IODA map, Chahar Mahall and Bakhtiari, South Khorasan, Kermanshah, Kerman, Alborz, Yazd, Ilam, Hamadan, and Qazvin had the most disruptions.

We saw two visible drops on May 3rd 19:00 UTC and May 15th 22:00 UTC in the number of networks reachable through BGP, and according to the IODA outages data, on AS58224 (TCI) in Chahar Mahall and Bakhtiari. IODA also showed outages on AS58224 of TCI in South Khorasan.

A graph showing disruptions in South Khorasan Province in May. The orange arrow highlights a period of potential minor disruption detected via BGP and Active Probing methods. The red arrow at 22:00 UTC on  May 17 marks a brief period of major disruption, with BGP and Darknet scores falling to near zero, alongside a small BGP anomaly.

According to the IODA data, five major internet providers were suffering from internet outages. 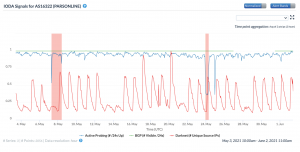 As excitement builds over the potential of satellite-based internet services, we argue that they’re unlikely to provide solutions to online censorship any time soon.