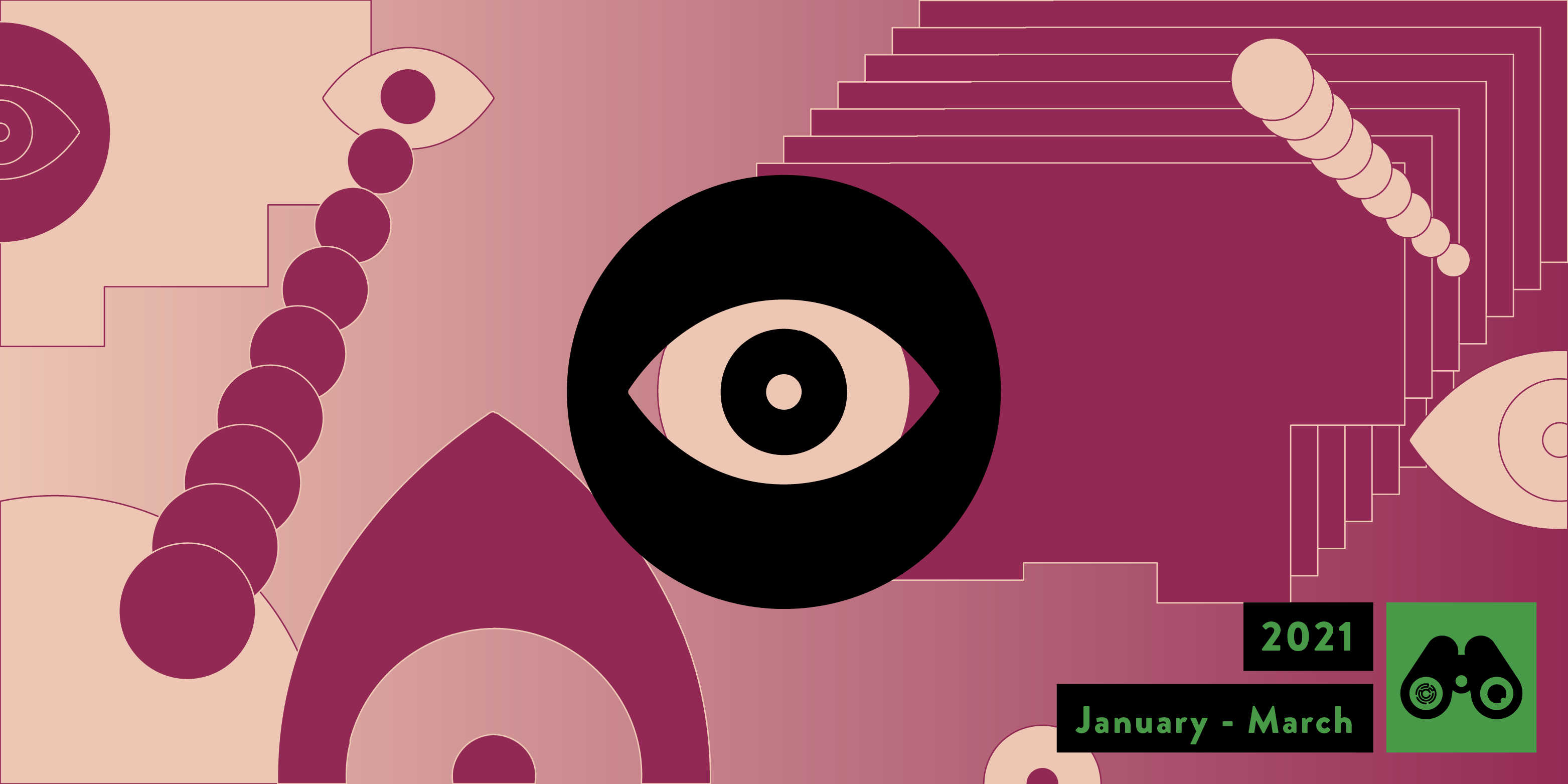 During the first three months of 2021, we observed further tightening of restrictions in Iran’s online public space as the country’s Cyber Police (FATA), Judiciary and Intelligence services, intensified their efforts to monitor Iranians’ online activities, and take action against individuals.

A number of significant events concerning Iran’s internet took place during the first few months of 2021. The secure messaging app Signal – which experienced a surge in users following changes to WhatsApp’s security policies – was filtered in January, however no authorities took responsibility for the decision.

In February, a local shutdown was implemented for several days in a number of cities in the southeastern province of Sistan and Baluchestan, during protests following clashes between fuel traders and security forces, in which a number of people were killed or injured.

In March, Iran’s Supreme Leader Ali Khamenei marked the arrival of the Iranian New Year with a speech denouncing “those in charge” for a “lack of management” of Iran’s internet. Two days later, Hossein Salami, the Commander-in-Chief of the Islamic Revolutionary Guard Corps (IRGC) wrote a letter to Khamenei in which he vowed to “free” Iran’s Internet from the “lack of management” that he had described.

This edition of FATAwatch covers the period January-March 2021. It documents ongoing violations of Iranians’ fundamental rights in online spaces, including further arrests on political charges, as well as for online activities judged to violate the Islamic Republic’s moral principles – these encompass a state crackdown on online gambling, as well as its deeply gendered policing of online violations of the Islamic dress code.

On 7 January the Court of Appeal for Isfahan Province upheld Zahra Nazouri’s one year prison sentence, which was issued by the province’s Revolutionary Court.  Nazouri is married to the Iran-Iraq war veteran Abdolrasoul Mortazavi, who is currently serving a sentence at Evin political prison for signing the “Statement of 14 Political Activists” calling for Iran’s Supreme Leader Ali Khamenei to step down. According to the Human Rights Activists News Agency (HRANA) Nazouri’s charges include “activity against the state”. A source has also revealed to HRANA that the evidence used against Nazouri included “material published online in protest of her husband’s sentence”.

On 12 January Colonel Davoud Moazami Goudarzi, FATA Chief in Tehran reported the arrest of Telegram channel administrators for advertising the sale of hygiene products and personal protective equipment using “immoral and immodest” images. According to Goudarzi the channel had more than 9,000 followers.

On 25 January Colonel Ehsan Aneghi, the FATA Chief in Markazi Province reported that an individual had been arrested for “disrupting public opinion” against a manager at a major factory in the city of Arak. The individual arrested was accused of posting “false” and “worrying” information online. Their computer and other devices were confiscated before being referred to the Judiciary.

Later, on 29 January, Mahmoud Alifar, the Police Chief of Gonbad-e-Kavus in Golestan Province reported the arrest of an individual for posting “modeling photos” on Instagram.

On 31 January Hossein Ghasghaei was sentenced to three years imprisonment by the 28th Branch of the Revolutionary Court in Tehran for “insulting the Supreme Leader” and “spreading propaganda against the state”. In the previous year Ghashghaei received a suspended one year prison sentence and a fine of 40,000,000 IRR for spreading “propaganda against the state”, “spreading false information” and “disrupting public opinion and insulting officials and agents”.

Colonel Yousef Shakeri, FATA Chief in North Khorasan Province, reported that on 2 February a man and a woman were arrested for “disrupting public peace” and posting “false information” on an Instagram news page.

On 6 February Colonel Ali Mohammadpour, the FATA Chief in South Khorasan Province, announced the arrest of a “young man” who advertised “massage [services] for women” on Instagram with “immoral aims”.

On 11 February the Iranian writer and poet and member of the Iranian Writers Organisation, Alireza Nouri was arrested at his home by FATA in the city of Hamedan, and subsequently imprisoned. In June 2017 Nouri was sentenced to two years in prison for “blasphemy by writing insulting poems online”. Following an unsuccessful appeal he was due to start serving his sentence on 22 June 2020, which was stayed due to COVID-19 pandemic.

The Baloch Activists Campaign (BAC) reported that on 15 February, security forces arrested Abdulghafour Ghaderi from the city of Chabahar in Sistan and Baluchestan Province. An “informed source” revealed to the CAB that Ghaderi was an online activist, who had been identified after his Instagram account was reported to security authorities. The source reports that Ghaderi has been subjected to “physicial and mental torture” following his arrest. He has been accused of “spreading propaganda against the state, the disruption of public order, and supporting Baloch political groups”.

According to HRANA, on 17 February a number of people were arrested in Pardis County in Tehran for “posting immoral photos” on Instagram.

On 24 February Colonel Ebrahim Parsa, FATA Chief in Golestan Province, reported that an individual had been arrested for promoting “anti-social and illegal” behaviour on social media, adding that their “equipment” had been confiscated.

Also on 24 February, FATA in the city of Ardabil reported that over the past 11 months, 73 people had been arrested for running gambling and betting sites, with an estimated total turnover of 74 billion IRR.

On 2 March, FATA in Gilan Province arrested an individual for posting “vulgar and immoral” photos on Instagram.

On 3 March, an individual was arrested by FATA in North Khorasan Province for “disrupting public opinion” and “inviting people to disrupt public order” online in relation to “unauthorised mineral extractions” from the province’s Albagh Mine.

On 4 March an individual was arrested for publishing an “unauthorised video” from the morgue at Behesht Masoumeh cemetery in the city of Qom. The video allegedly shows the bodies of COVID-19 victims, in order to highlight the “severity of the pandemic in the country”, and to suggest that the scale of the health crisis is “beyond the level admitted by government authorities.”

On 9 March the Instagram influencer Milad Hatam Abadi Farahani (otherwise known as Milad Hatami) was arrested by Turkish police and handed over to Iranian authorities at the Iranian -Turkish border. According to Hadi Shirzad, the Head of International Police in Iran, an Interpol red notice was issued for Hatami’s arrest for charges relating to “cybercrime, fraud and money laundering”. Prior to his arrest Hatami lived in Istanbul with his wife and daughter.

On 10 March authorities arrested the creators of a “comedy music video” posted on Instagram. According to the FATA Police Chief in Yazd Province, the creators attempted to recreate a foreign music video “with a Yazdi accent”, which was described as “immoral and anti-social”.

On 11 March, Iran’s Judiciary announced that a number of people involved in the production of an Iranian exile’s music video had been arrested. The US based Iranian singer, Sasan Yafteh (also known as Sasy), released a music video for his song “Iran, Tokyo” in March 2021, featuring a cameo from the adult film star Alexis Texas. The Judiciary announced that several people involved in its production had been arrested, and said that “those sharing the video on the app Dubsmash would be prosecuted.” The Judiciary added that Iran would use “international resources” to prosecute the singer in the event that the video is released publicly. The video was subsequently released, although the Judiciary has taken no public action against the singer.

On 14 March FATA in Markazi Province reported that 13 people had been arrested over the previous three months for “promoting gambling and betting websites”.

On 15 March the FATA Police Chief in Sistan and Baluchestan Province reported the arrest of an individual in the city of Mirjave for “blasphemy” and “disrupting public order” on Instagram.

FATA in Kohgiluyeh and Boyer Ahmad Province reported that an individual “promoting gambling and betting websites on Instagram” had been identified and arrested on 17 March.

Also on 17 March, FATA reported that an individual had been arrested for running an Instagram page “with the aim of destroying and disrupting public opinion” against university authorities in the province.

On 22 March FATA in Mazandaran Province announced that “the largest gambling gang in the country” had been destroyed following the arrest of a number of individuals. According to the province’s FATA Police Chief Colonel Sameh Khorshad, FATA found “470 bank cards which were rented or fraudulently acquired by the accused for financial transactions”. The group’s turnover from fraud was claimed to be “20,000 billion IRR”.

On 31 March the FATA Police Chief in Tehran reported the arrest of an Instagram user with “more than one million followers” who “advertised gambling and betting sites”.