February was a difficult month for Iranian internet users, with multiple network disruptions. The most significant incident was a complete shutdown of mobile data services across Sistan and Baluchestan Province between 24-27 February, in response to local anti-government protests. However, further disruptions took place earlier in the month, predominantly affecting users’ access to Instagram.

This shutdown was initially limited to a number of cities in the province, including Zahedan, Khash, Saravan, Zabol, Darak, and Chabahar. These disruptions were soon expanded to cover the entire province. The disruptions started on February 24 at around 21:00 local time, and continued until February 27 at 00:33 local time. According to Filterwatch’s research, and reports from local sources, the situation started to escalate when protesters set fire to the picture of Supreme Leader Ali Khamenei in front of the IRGC Intelligence Organization’s office in Zahedan.

The shutdown was interesting for a number of reasons: firstly, for its isolation to mobile networks – landline connections were unaffected. Secondly, for the fact that affected users were cut off from the global Internet and the National Information Network. And thirdly, like the July 16 internet shutdown in Behbahan, no network measurement tools were able to detect any sign of the shutdown. The only common factor between these two Internet outages was that the shutdown only affected mobile networks, and not fixed-line services.

According to a source in the ISP, the MCI network is being controlled and handled from Tehran. The source states that local offices have no technical authority, and lack the ability to cut off mobile data.

Filterwatch also detected a number of other short-term disruption incidents throughout the month.

Based on OIM data Filterwatch observed a number of ASes being disrupted, or in some cases cut off from the internet:

AS25124, owned by DATAK Internet Engineering, Inc, lost most of its data traffic from the beginning of the month until February 3. On February 7, DATAK was briefly disconnected from the internet again.

AS57240, owned by Atrin Communications and Information Technology Co. (PJS), was cut off from the internet again at midnight on 7 February.

AS44208, owned by Shiraz-based ISP Farahoosh Dena PLC was cut off from the internet at around 18:00 local time.

AS39650, owned by Atrin Communications and Information Technology Co. (PJS), lost most of its data between 7-8 February.

Iranian officials did not provide an explanation about the disruption, and the cause of the incident is unclear.

AS204213, owned by the hosting company Netmihan Communication Company Ltd, was briefly disrupted.

On 22 February Iran’s Revolutionary Guard Corps (IRGC) forces clashed with fuel traders in the city of Saravan, near the Iran-Pakistan border. According to Baluch Campaign activists, 10 people were killed and five were injured. Local sources – who spoke to Filterwatch under the condition of anonymity – reported that IRGC officials stopped the fuel traders near the border and held them for four days. As the fuel traders ran out of food and water, they tried to continue their journey across the border. IRGC border forces reportedly opened fire, killing at least ten people and injuring several more. 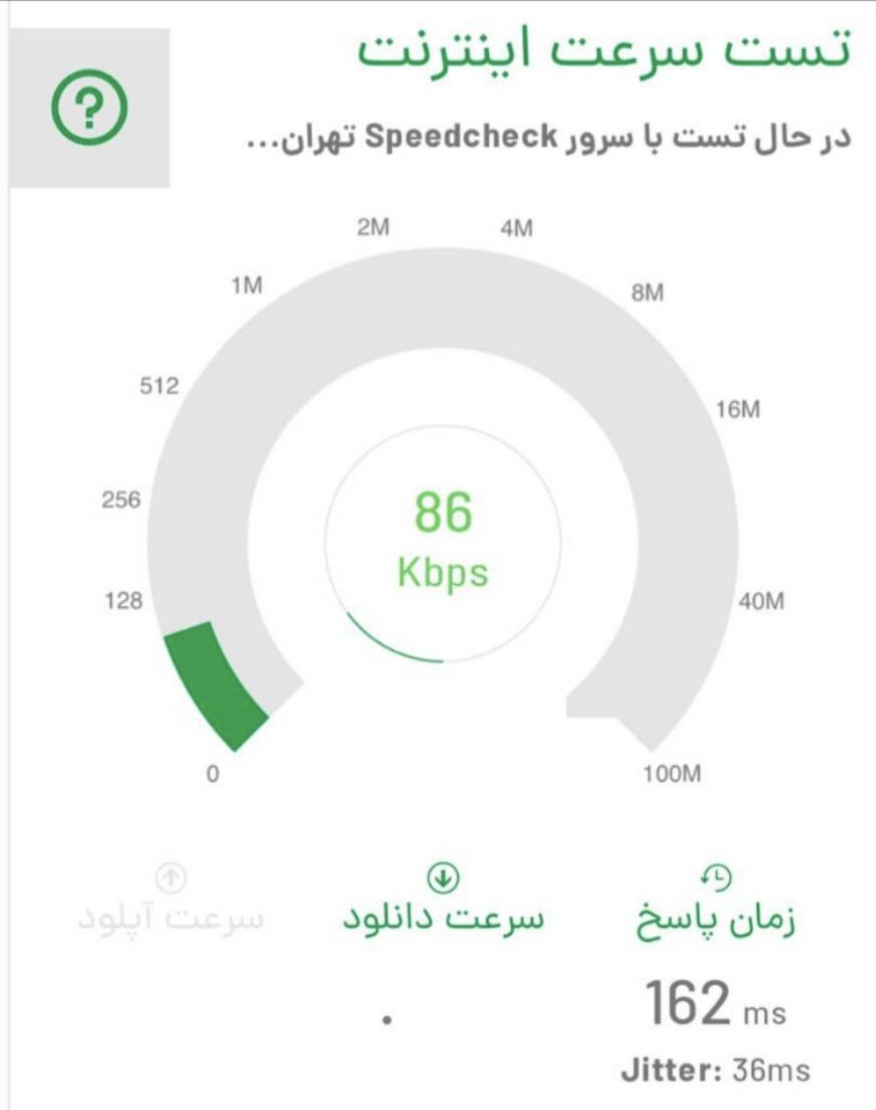 The incident sparked protests, and on February 23 dozens of protestors gathered outside the governor’s office in Saravan, which resulted in clashes between protesters and security forces. Filterwatch did not observe an internet shutdown at this point.

According to local sources in the city of Zahedan, on February 24 at around 21:00 local time, a small group of protestors set fire to a poster of Iran’s Supreme Leader Ali Khamenei in front of the IRGC intelligence organization office in Zahedan. This incident led to another protest, and in response mobile data was disconnected. Around 21:30 local time, mobile data was heavily disrupted and slowed down, and by 21:40 all mobile operators were cut off from the internet in the cities of Zahedan, Khash, Saravan, Zabol, Darak, and Chabahar.

While some network connections began to be restored the next day, internet speeds remained very slow, with a source confirming as much with a screenshot of speed test (using MCI).

The speed for a connection between Zahedan and a server based in Tehran was 86Kbps. This is meant to be a 4G network, and should be delivering speeds between 5Mbps and 12Mbps. An old dial-up connection was between 56Kbps and 128Kbps.

Filterwatch also received a speed test from Darak –  a small town 621km away from Saravan – showing MCI speeds at 60Kbps.