After a surge in global popularity, Iran blocked the secure messaging app Signal in January. Our report has more details on this and the other internet disruptions of the month.

Following repeated disruptions to Instagram’s services in Iran in December 2020, in January it was the turn of the messaging app Signal to face the heat. The end-to-end encrypted messaging app surged in global popularity following the announcement of changes to WhatsApp’s privacy policy, seemingly triggering a response from Iranian authorities. The app was filtered in on 25 January 2021 at 11:25 Tehran local time, based on a judicial order issued sometime in 2017. Signal had previously been blocked and unblocked in December 2017, without any explanation from Iranian officials.

Access to Signal was intermittent from January 17 onwards, up until the app was blocked completely on 25 January. Filterwatch’s investigation demonstrated that Signal was blocked and unblocked multiple times on 17, 18 and 19 January.

Since 25 January, Iranian officials have refused to take responsibility for the order, seemingly in an attempt to avoid public criticism for blocking yet another global service. A source told Filterwatch that on the evening of 25 January, the ICT Ministry contacted a number of technology journalists asking them to not report that the Telecommunication Infrastructure Company (TIC) had blocked Signal’s website. Filterwatch’s investigations show that Signal’s website was indeed blocked by the TIC, and that the Signal app was blocked at the ISP level.

Since the enforcement of the blocking order, neither government officials nor ISPs have taken responsibility for the decision – perhaps a political judgement given that we are only a few months away from Iran’s June 2021 presidential elections. More details on internet disruptions in January follow in our report below.

The web hosting and cloud services company Iman Samaneh Sepehr LLC (AS203100) was briefly disconnected from the Internet on 6 January, for unknown reasons. No explanation was offered by either the company, or ICT Ministry officials.

Access to Instagram was intermittent this month. Filterwatch investigation revealed that from 13 January, Instagram was not accessible on multiple occasions in Iran for a short period of time mainly on Asia Tech and Pars Online.

Pars Online (AS60976) experienced a brief period of disruption on 23 January. Pars Online is one of Iran’s largest ISPs.

Abazarhaye Farsi Shabakeh (Persian Tools) Co.,LTD. (AS57687), known as Persian Tools – one of Iran’s oldest Iranian hosting companies – was briefly cut off from the internet on 23 January. No explanation was offered by either the company, or ICT Ministry officials.

Access to the messaging app Signal was intermittent up to 17 January, and the app was eventually blocked on 25 January. Filterwatch investigations show that Signal website’s was blocked and unblocked multiple times between 17-19 January.

Since the app was blocked on 25 January, Iranian officials have refused to take responsibility for the decision. A source revealed to Filterwatch that on the same evening, the ICT Ministry contacted a number of technology journalists and asked them not to report on the fact that the Telecommunications Infrastructure Company (TIC) had blocked Signal’s website. Filterwatch’s investigation demonstrates that Signal’s website was blocked by the TIC and the application was blocked on the ISP level. 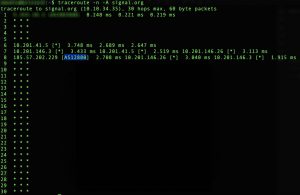 The Signal website was also blocked at the DNS level.

In a press briefing on 26 January a Judiciary spokesperson stated that “during the transformation period [Ebrahim Raeisi’s tenure at the Judiciary], the Judiciary has not blocked any media, news agencies or messaging apps”.

Another source told Filterwatch that senior staff at ISPs do not wish to discuss the blocking of Signal, and that they have been declining journalists’ calls for comment.