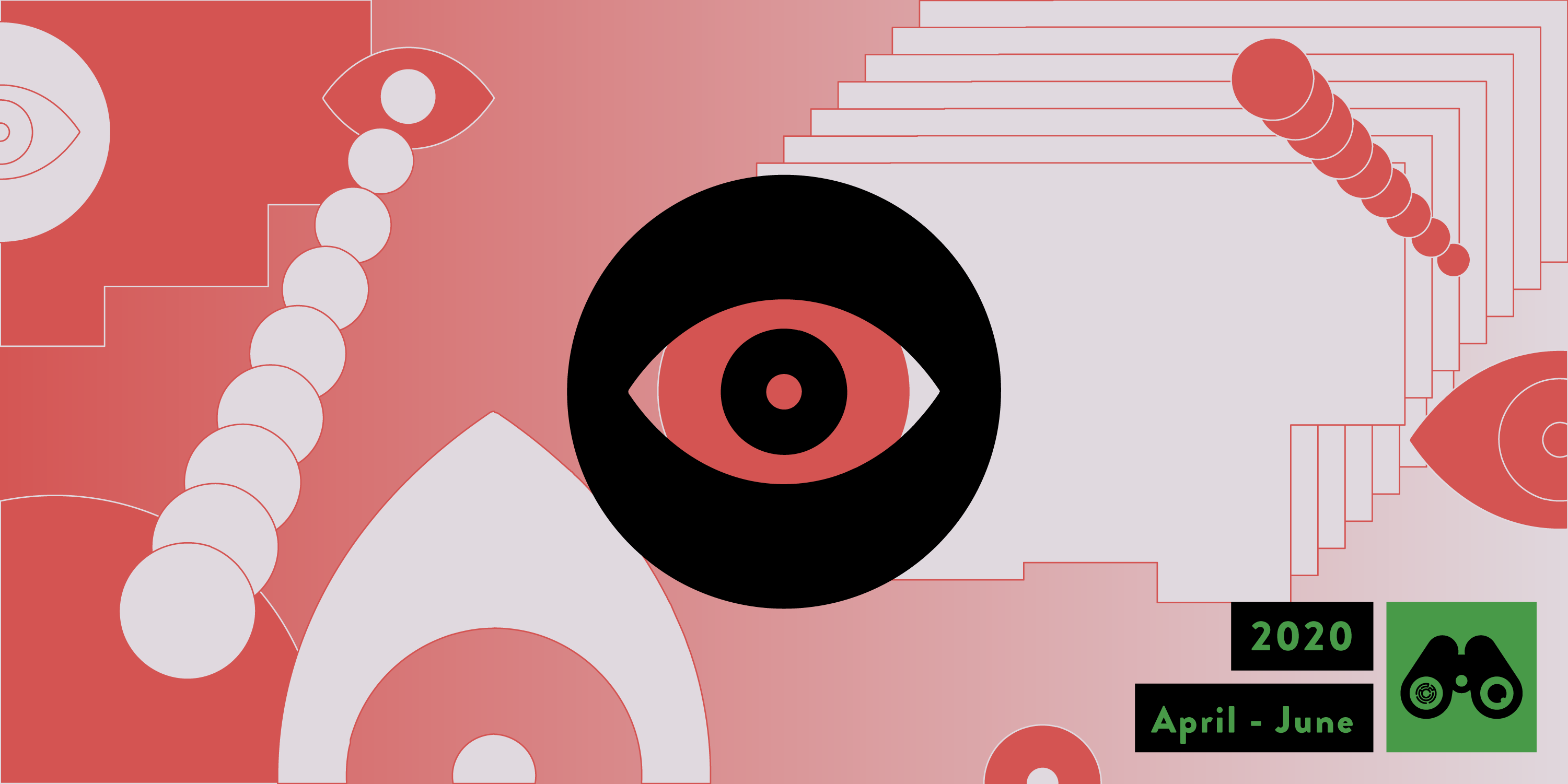 Major social media platforms, especially Instagram – one of the few international platforms still accessible in Iran – continue to be a target for Iranian authorities for yet another quarter. While millions of Iranians use Instagram and Telegram (with the help of circumvention tools) everyday Iran’s Cyber Police (FATA) with the help of the judiciary have tried to contain politically or socially subversive activities on these platforms. Police forces summoned, arrested, and charged ‘influencers’ in yet another wave of crackdowns, who received heavy sentences in an attempt to prevent the posting about their different lifestyles through Instagram. In this environment, many other influencers were either directly threatened with police action, or else subjected themselves to self-censorship in order to avoid this threat.

During the second quarter of 2020, which coincided with the first weeks of the Iranian New Year (which started in March) and the introduction of COVID-19 quarantines and lockdowns in Iran, many turned to the online world as an escape or remedy from restrictions imposed on their offline world. As a result, online suppression, restrictions on freedom of expression, interference with citizen’s private lives, and police reactions to criticisms of the government’s COVID-19 response intensified.

During this period gambling websites were also targets of a major crackdown by FATA, resulting in a large number of arrests, especially when it came to websites with high financial turnovers.

In a TV interview in April, judiciary spokesperson Gholamhossein Esmaeili once again confirmed the judiciary’s aggressive attitude in policing the Internet, stating that he considers the internet a part of the ‘[fabric] of the Islamic Republic of Iran’ which ‘is disorganised, and parts of it are in the control of outsiders/foreign entities’. He stated that the National Information Network (NIN) that has been envisioned ‘has not taken shape yet’, and asked the ICT Ministry to work on its delivery as soon as possible.

In this report, we focus on how Iran’s police forces and judiciary restricted and violated the fundamental rights of Iranians in online spaces between April and June 2020, as well as documenting other major interventions by these agents into the policy realm.

Since the outbreak of the COVID-19 pandemic, state authorities have taken an increasingly interventionist role to crack down on what they describe as ‘misinformation’ in online spaces. However, there remains a great deal of ambiguity over the precise scope of the term ‘misinformation’, especially when no clear distinction is made between ‘misinformation’ and ‘disinformation’. Filterwatch has serious concerns that the police and the judiciary are exploiting this justification for limiting free expression to limit legitimate forms of online expression, and to crack down on government critics.

During the first three months of the Iranian calendar year, the nationwide spread of COVID-19  did indeed result in the rapid online spread of rumours about the disease and its progression. Rumours included discussions about possible local lockdowns in certain cities, reports on the state of health equipment and hospitals’ readiness, among many other issues. The spread of conversations about such topics were met with a response from the country’s security forces and judiciary.

In April in the cities of Mehabad, Hormozgan, Mazandaran, Fars, Western Azerbaijan, Kerman, Kokiloie and Boyer Ahmad, and Tehran, individuals were identified and arrested for ‘spreading rumours’ about COVID-19. It is unclear how many of those arrested were subsequently charged.

The FATA Chief for Hormozgan reported the arrest of individuals accused of publishing ‘inflammatory and false’ comments relating to the province’s lockdown measures, and the closure of petrol stations in Banadar Abbas. These arrests made use of provisions in a resolution by the province’s Security Council, designed ostensibly to combat the COVID-19 pandemic.

The FATA Chief for Rasht Province announced in May that eight people who had published ‘false information’ on social media about COVID-19 had been identified and were summoned by the police. He added that “some internet users publish information such as jokes, or because of their worries and anxieties, post articles, videos, or audio recordings on social media. Given the conditions in the online and offline spaces, it can disturb public opinion, which will be met with security and legal forces”.

Misinformation-related arrests in the island of Kish, and Markazi and Fars provinces continued during the month of May.

In June, FATA Police for Bushehr reported the arrests of 119 people who were active online and published information about COVID-19, 30 of whom were referred for prosecution. In the same month, two bakery workers in the city of Zahedan were also arrested for publishing a video criticising a flour supplier for the presence of worms in their product on social media, which also showed the details of the supplier of the flour. According to the FATA Chief for the province, the arrest was made following a complaint made to them by the supplier for spreading ‘misinformation’ about the supplier.

Around a year ago, Iran’s ICT Minister Mohammad-Javad Azari Jahromi said: ‘I will soon reveal [what is going on] behind the scenes’, referring to how gambling sites are able to make financial transactions. However, no revelations about the behind-the-scenes operations of gambling websites has been made by Jahromi so far, and it remains unclear how gambling websites are able to make financial transactions in Iran, despite legal restrictions. During the first three months of 2020 FATA Police reported that they had identified and ‘confronted’ some of these sites.

In May, the FATA Chief in Hormozgan Province, Colonel Ali Asghar Eftekhari, reported that an individual attempting ‘financial fraud’ by advertising investment opportunities in a gambling website on Instagram had been arrested. In June, the Head of FATA Police, Commander Vahid Majid announced that 6,157 ‘sites’ (the use of the word sites here appears to be referencing Instagram profiles or pages operating through pre-existing websites), and 730 websites have been identified as gambling sites. He added that “2,884 of these sites and websites have faced legal action”. The FATA Chief in Semnan Province also reported the arrest of an individual for setting up a gambling website with a turnover of 60,000,000,000 IRR ($1,425,008.88 USD).

In June, the FATA Chief for Ardabil Province reported that they had identified a couple who had set up and managed a gambling website in order to commit [financial] fraud against its users. The FATA Chief for Ardabil also pointed to the identification of 11 individuals operating gambling websites in the province and added that “according to the legislation on gambling, [it is] illegal in any form, even online, and is subject to Article 708 of the Islamic Penal Code”.

During the first few months of the new Iranian calendar year (from 21 March 2020), a crackdown on online ‘influencers’ intensified. FATA’s National Chief Vahid Majid announced in May that “in the event of the publication of illegal materials or those that are against the cultural attitudes of society, transgressors will be confronted”. The crackdown on famous online figures was carried out in the name of the “campaign to sanitise cyberspace’”, a phrase used previously to describe a crackdown of Instagram influencers. In February 2018, following comments made by Prosecutor General Mohammad Javad Montazeri threatening influencers, many women and girls deleted their photos showing them without hijab, and subsequently posted photos with full hijab, stating in their user bios that they “followed the laws of the Islamic Republic”.

According to a FATA announcement in April, at least six people were summoned in Hormozgan and Yazd provinces for publishing images and clips containing ‘offensive’ and ‘immoral’ content on Instagram. The individuals were said to have been summoned in coordination with the judiciary and some of those summoned had their Instagram pages deleted and were referred to the courts for further measures.

In May, in Savojbolagh in Alborz Province, one person was arrested for running channels containing ‘immoral’ content and ‘inciting public disorder’. In the same month, the FATA Chief in South Khorasan Province reported the arrest of an individual who taught dance on Instagram. Additionally the FATA Chief in Yazd Province said that the administrators of two Instagram pages with a combined 50,000 total followers were identified and their details handed to the judiciary for further legal processes. The administrators are accused of promoting ‘Western lifestyles’ and ‘degradation’. Similar cases were also reported in Khorramabad and Mazandaran.

However, the most sensational news of these crackdowns was the prison sentences handed to two popular Instagram influencers, Seyyed Ahmad Moein-Shirazi also known as “Picasso Moein”, a kickboxing champion and his wife, Shabnam Shahrokh. In a video posted on Instagram, Moein-Shirazi revealed that a 16-year prison sentence from the revolutionary court was handed to him and his wife. The couple were accused of ‘engaging in anti-government activities’, ‘spreading corruption’ and ‘damaging public decency’ and the ‘publication of vulgar and obscene’ content. The evidence for these charges were taken from the couple’s Instagram accounts.

Another Instagram celebrity, Alireza Japloghi, an Iranian parkour practitioner was arrested for a photo posted Instagram account captioned  ‘Sunrise in Tehran – Sadr Bridge’. In the photos he was performing Parkour moves as well as kissing a girl. The photo went viral across various on social media and received a large amount of attention.

On 20 May, the FATA Deputy for Social Affairs, Colonel Pashaei, also stated that ‘over 320 people were arrested’ relating to online activities, and that not wearing hijab online constitutes’ inappropriate’ behaviour and will be considered a crime.

The FATA Chief for Eastern Azerbaijan province also reported the arrest of an individual who had attempted to ‘lure in and hire young, single women as models, through the Divar platform’. According to the Prosecutor for the city of Amol, a woman was arrested for posting ‘immoral’ photos online.

Also in the same month, FATA police force in cities of Ilam and Tehran reported arrests relating to content on their social media, such as a teenage girl posting photos and videos of parties. The administrators of several Telegram channels were also arrested.